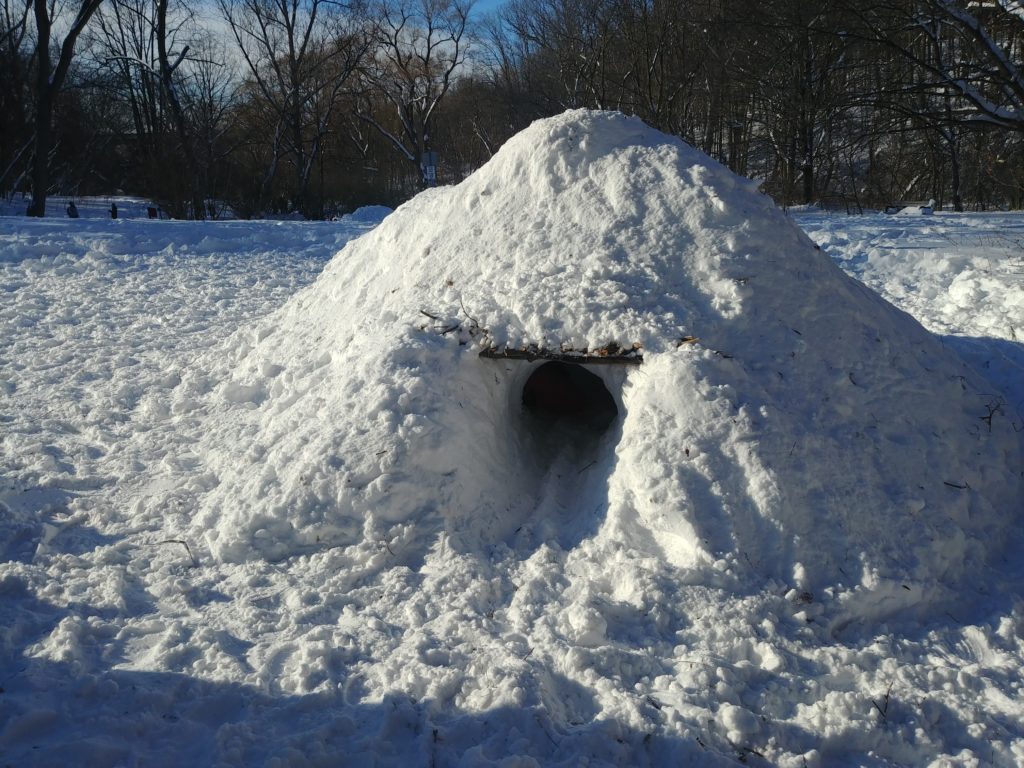 One chilly weekend morning in early February, our Fiery Foxes group (7-9 yo) gathered in a circle. The sun shone down from a cobalt blue sky, illuminating acres of perfect packing snow, a gift from one of Toronto’s snowiest winters.

“Does anyone know what a quinzee is?”* my co-instructor asked. Urgent hands shot up around the circle.

“A quinzee is like an igloo, but with packed snow!” exclaimed one excited child. “And you can even sleep inside it and it’s actually warm!”

My co-instructor smiled in agreement and told the kids a beautiful story of a spontaneous backyard quinzee that she’d made with some friends for a cozy slumber party on a particularly frigid day. The images of candles resting on shelves carved into the snow walls, and blankets carpeting the snow floor warmed our hearts, despite the cold around us.

Feeling inspired, we made a plan to build the quinzee in a nearby clearing, surrounded by cattails and phragmites. Step 1 – piling up the snow as tall as we could. Some of us did the cancan. Others reached our hands under snowbanks to pull out huge chunks of snow we called “snow bricks”. We were resourceful, making use of what little equipment we brought, knowing that nature is full of it’s own equipment, if we looked hard enough. We took turns sharing one little shovel. One kid found a stick that was shaped like a pickaxe to break up dense snow, another found a big piece of bark to scoop up fluffy snow.

Soon enough the pile of snow was up to the height of the tallest child. We were ready to move on to the next step. But wait – we couldn’t dig our shovel and sticks and hands in yet – we had to let the snow sinter. Sintering is the process of snow compacting itself over time, as the air mixes in with the loose snow to make it stronger. After sintering, the snow will be sturdy enough to dig into. So we had to practice patience. While the snow was sintering, the kids played a game in the woods, running around to keep warm. Because we had to wait, the moment when we stuck the shovel in for the first time was even more exciting.

Everyone had a different job in team quinzee. Those with eyes for design discussed where the best place to put a window would be. Those restless creatives lodged a [not completely rustic and natural] plank of wood into the backside of the quinzee as a pretend balcony. Those with restless arms took turns digging. And those who wanted to run around gathered sticks to poke into the quinzee and measure the width of the walls.

In no time, we were pulling out the sticks and trying out our beautiful quinzee. We took turns curling up inside, getting some refuge from the wind and bright sun. Luckily even an adult could fit inside! The light from our west facing window and the thick layer of packed snow made the quinzee an appealing spot for a nap.

As is always the case, good things must come to an end. We took turns trampling our masterpiece until she was again reduced to a big pile of snow, full of possibilities. This, we explained to the kids, was so that others in the park wouldn’t try out our quinzee. Though we know it’s safe now, changing weather might make it unsafe for others. Even this part of the cycle is fun – making the trampling into a game, seeing who could make the ceiling collapse first.

Why did we spend time in the cold and snow? Why did we make a quinzee, if we have a home that is so much bigger, more equipped, and won’t melt when the weather warms up? There are many reasons, but for me, on that day, two words came to mind: gratitude and connection. Through our shared experience of quinzee building we learned to feel grateful for our own homes. We learned that we, just like all the other animals in the park, have the ability to make a warm shelter for ourselves. The feeling of self-sufficiency that comes from that realization is so very empowering, and the understanding of shared needs and space with other animals deeply connects us to nature.

*Snow caves, quinzhees and similar snow and ice shelters are built all around the Northern world, including the Finnish ‘Lumitalo’. The word “Quinzee” (alternatively spelled “Quinzhee”) comes from the Athabaskan (also Dene, Athapaskan) language family, spoken by various Indigenous peoples in the North West region of North America.